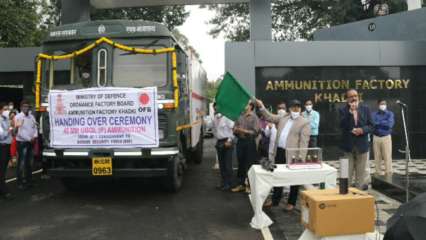 The Khadki Ammunition Factory in Maharashtra’s Pune has sent the first consignment of 40 mm UBGL ammunition to the Border Security Force, the Ministry of Defence said on Wednesday.

This ammunition is fired from a launcher fitted under the barrel of 5.56 mm Rifle (INSAS).

“Inspired by the Prime Minister’s clarion call for an Atmanirbhar Bharat, Ammunition Factory Khadki, Pune, wrote a new chapter on self-reliance and indigenization of 40 mm UBGL Ammunition production on 11 August 2020 by sending the first consignment to Border Security Force,” the ministry said in a press release.

40 mm UBGL ammunition is designed and manufactured by Ammunition factory, Khadki with the components sourced from Indian Industries. It has various advantages over traditional hand grenade, including its lightweight and 400-metre range against the 30 metres of hand grenade.

It can be fired by the same equipment (INSAS) held by the soldier and is also safe for the personnel.

This ammunition is imported by Army and Ministry of Home Affairs (MHA) units and there was a perceived need to indigenise its design and manufacture, the Defence Ministry said.

Hari Mohan, DGOF & Chairman, Ordnance Factory Board and MK Mohapatra, Sr GM Ammunition Factory, Khadki flagged off the First Consignment of 40 mm UBGL (Practice) to BSF in the presence of senior officers of OFB, AFK and Members of JCM, Works Committee and Unions & Associations on August 11.

With this event, Ammunition Factory Khadki joined the national endeavour to make India self-reliant in direction of defence production and save valuable foreign exchanges by way of import substitution, the ministry said.